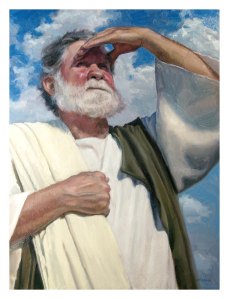 Far too many of us carry the mantle of the  orphan.  We never seem to measure up to our father.  Sometimes it words that someone else has said that make us feel unworthy.  They can be words from a friend, a parent, or a sibling.  These words spoken so long ago drive us and convict us to work feverishly to prove them wrong.  Often the person that has spoken these words over you has no idea.  Many times they had no intention of you taking it that way.  They may have been speaking what they thought was encouraging words to you.

Just the other day “Fred” told me the story of a time in his  life that was a low point and he felt like a failure. “Fred’s Friend” spoke to them of how maybe one day the would return and do this again when Fred was  “back on his feet.”  Fred took these words to mean that he didn’t measure up, he wasn’t good enough.  These words drove Fred for thirty years trying to prove his friend wrong! In the last years of his life realizing that those words were never intended as a point of contention but as kind words of encouragement.

This is the mindset of an Orphan

It’s the same voice the Prodigal son heard that told him he could “never measure up” he was a failure, his family would never take him back, he was unclean and could not be made clean again…  He almost believed the Hype, but he knew that he was a son and that finally overrode the orphan voice that had been ruling his life.  He knew his Father was looking everyday for his son to come walking up the road.

Fred was driven to work longer and harder than anyone else for thirty years of his life. Trying to prove his friend wrong. This friend who never intended their words to be judgment over Fred.

How often do we do this?  How many of us are working like crazy on something, trying to prove someone wrong?  Trying to “rub it in their face?”

I would venture to say that almost all of us have some hurt, anger, or loss that we are spending a lifetime trying to recover from.

We are only giving proof that the enemy has once again dominated another human.  Our enemy has been at this a long time.  He knows that we are amazing creatures and he is jealous of the love we are capable of producing.

He want us to beat ourselves up, be an Orphan, feel unloved, unwanted, and  inadequate. All the while we have a Father sitting on the front porch looking for the dust of a traveler walking up the road.  With each visitor he encounters He is longing that one of them will be you.  He never wears out, never grows weary and never considers that you are not His.

His arms are open wide, waiting for you to return, waiting for you and I to realize we are not Orphans but Priest and Kings meant to rule and reign for Eternity.  He is waiting on us to rest in Him.  So relax, slowdown, spend time with your family, laugh, play, and rest.

Allow yourself to not feel guilty, driven, or forced into labor.  Don’t let your convictions that drive you create another Orphan in someone else.

Pray for Grace to cover our words so that our words don’t create a orphan in someone else.

4 From John to the seven churches in the province of Asia. Good will[a] and peace to you from the one who is, the one who was, and the one who is coming, from the seven spirits who are in front of his throne, 5 and from Yeshua Christ, the witness, the trustworthy one, the first to come back to life, and the ruler over the kings of the earth. Glory and power forever and ever[b] belong to the one who loves us and has freed us from our sins by his blood 6 and has made us a kingdom, priests for God his Father. Amen.

8 When the lamb had taken the scroll, the four living creatures and the 24 leaders bowed in front of him. Each held a harp and a gold bowl full of incense, the prayers of God’s holy people. 9 Then they sang a new song,

“You deserve to take the scroll and open the seals on it,
because you were slaughtered.
You bought people with your blood to be God’s own.
They are from every tribe, language, people, and nation.
10 You made them a kingdom and priests for our God.
They will rule as kings on the earth.”

One thought on “Orphan”